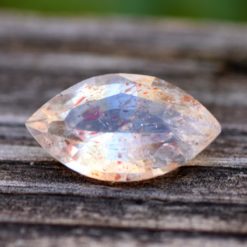 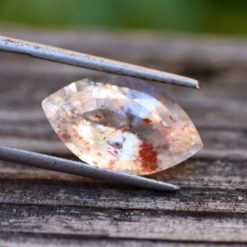 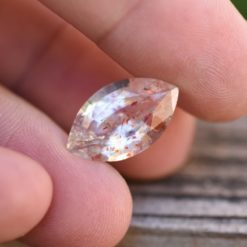 Origin: Tanzania, Africa
Treatment: None
This is a Sunstone from Tanzania, Africa. I cut the gem from the rough shown in the pictures. Sunstne has a beautiful fleck of colour cuased by the inclusions inside it. Such a unique and beautiful gem.

Sunstone is a plagioclase feldspar exhibiting in certain directions a brilliant spangled appearance, which has led to its use as a gemstone. The effect appears to be due to reflections from enclosures of red hematite, in the form of minute scales, which are hexagonal, rhombic or irregular in shape, and are disposed parallel to the principal cleavage-plane. These enclosures give the stone an appearance something like that of aventurine, hence sunstone is known also as “aventurine-feldspar.”