This gemstone is known by every lover of gemstones because it dates back to antiquity when it was worn by Cleopatra, an Egyptian queen. This stone was also used in burial in olden times as they were found in the tombs of mummies in Egypt. Emerald is the most popular green gemstone. Emerald, despite its popularity is kind of an expectation to commonly worn gemstones as it is not highly durable. The Emerald is a member of the illustrious Beryl family.

Emeralds are generally green in color, so when buying an Emerald you should watch out for the intensity of the coloration. Commonly the greener it is the more valuable it is as long as it hasn’t been dyed. Emeralds can be used for earrings and last longer if you look after them well.

Green Sapphires were not priced or valued before now, but in recent times the demand and value of the gemstone gained ground and popularity. The green Sapphire is a rare and highly durable are unfortunately difficult to find. This gemstone gets its color from iron components in its environment. The green Sapphire comes in different shades of green, from light green to dark green. Because of its rareness, synthetic versions are made to make it affordable to buyers. Keep an eye out for Green Star Sapphires, they are truly beautiful when exposed to light and look amazing in a ring.

A commonly known green Garnet is the Tsavorite Garnet. It was first discovered in Tanzania in the late 60’s and its green color is gotten from chromium or vanadium during the process of its formation. It is from the Grossular Garnet variety of Garnet. It is believed to inspire love and commitment and also protect against depression and nightmares. The Tsavorite Garnet comes in two major tones of green, the yellowish hues and the lighter tones. The value of the Tsavorite is in its color when the hue and tone depart from the deep green its value depreciates. The Tsavorite Garnet is a very rare germ that can serve as a substitute for Emeralds because it is less expensive and more durable.

Jade is also known as ‘’Dream Stone’’ and is an ornamental rock used commonly in making jewelry. Valued for its metaphysical properties Jade was used commonly in ancient times. Its usage can be traced to 7000 years ago in China. There are two varieties of Jade, Nephrite and Jadeite Jade. Nephrite is not rare; hence, it is less expensive compared to Jadeite which is rare and expensive. Jade is tough and compact fairly hard, and it is of higher value in Asian countries.

This gemstone is only found in one color which is green; this makes it an idiochromatic gem. Peridot is formed in the lower layer of the earth crust, and it comes to the earth surface as a result of violent geological activities like a volcanic eruption. Peridot is fairly durable and is sold for not too expensive prices. Peridot is also called the volcanic gemstone because of the process of its formation. It can be cut into any desired shape and made as jewelry. Peridot becomes more beautiful when they have been cut into a specific shape.

Malachite is a particularly strong gemstone as it has perfect cleavage; thus it needs to be handled with care. Also note that this tender gemstone reacts abnormally to the exposure of chemicals. Despite these conditions, it is still demanded because it has an affordable price because of its stunning pattern that captures the eyes.
The pattern on the body of the malachite is as a result of the intergrowth of the gemstone with other elements and minerals. There are Malachite gemstones that are highly priced; these are the ones with an unusual pattern.

This gemstone possesses vitreous luster which makes it interact beautifully with rays of light. This gemstone makes a perfect jewelry collection. The unique feature of the gemstone is that it is not heat treated like other colors of Tourmaline.

This gemstone occurs in colors that range from faint green to vivid Emerald green. Demantoid Garnet belongs to the garnet family, and they happen to be the most valued in the family, maybe its because if its rare nature, because it is usually found in sizes under 2 carats. The impurities in Demantoid has made it a brilliant stone adding to its value plus its natural durability feature, making it highly priced.

This gemstone was named after the Amazon forest; it is a very rare gemstone that comes in different shades of varying from light green and also blue-green and deep leaf green. The beauty of the gem comes as a result of white lines forming the different pattern on the body of the gem to add depth and character to the gem. Amazonite is a natural gemstone that does not go through any treating process to enhance it in any way. It is a fairly hard translucent to opaque gem. Amazonite is a valued gemstone because it is rare therefore is reasonably priced buy buyers. 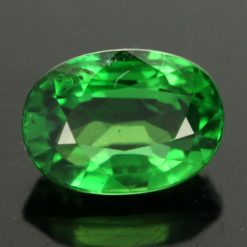