Pleochroism is visual property that only occurs in double refractive gemstones. The are some gemstones like Tourmaline, Tanzanite and Ioloite that have very obvious pleochroism. But what is it? A picture says a thousand words so lets have a look at an example of Tanzanite.

This is the same piece of Tanzanite looking through different polarized filters. It shows the colours that Tanzanite is capable of showing. 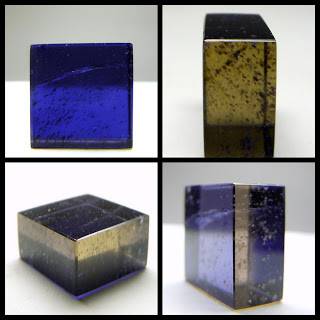 The square piece above clearly shows the different colours that Iolite can display when looking at it in different direction.

Tanzanite is another gemstone whose pleochroic colours can been seen easily. Usually it is easy to see the violet and blue colours 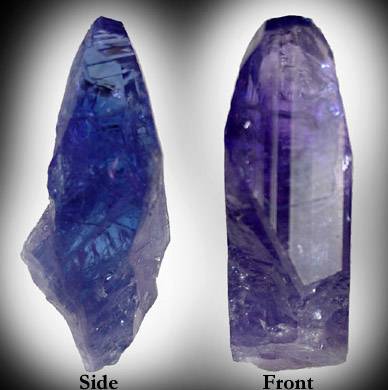 It is easy to see this with a cut Tanzanite. In the picture below, the table of the Tanzanite is blue, whereas the edges on the gem are slightly purple. This is because the cut of the gemstone allow us to see the other pleochroic colours in Tanzanite.

Iolite, as we saw before, is strongly pleochroic. Lets have a look at a cut stone and see what effect it can have on the cut gemstone

Look at some of your gemstones and see if you can see any effects of pleochroism. Hold them in your fingers and rotate them in all different direction and enjoy the different colours your gem can produce that you didn’t even know about!