Ready to learn about one of the Earth’s rarest natural specimens? Great! Because today we’re talking all about the wonderful phenomenon that is one of nature’s most beautiful gifts: trapiche gemstones.

One of the most unique features about gemstones is that they are vividly colored remnants of magic drawn directly from our beautiful planet. Gemstones exist in a variety of colors, from deeply saturated to opaque, and each have their own story to tell.

From sapphires to rubies and many variations in between, trapiche gemstones feature an artful pattern balancing geometry and symmetry into an eye-catching pattern resemblant of a starburst.

Which is exactly why trapiche gemstones do an excellent job at demonstrating how skillful nature’s hand really is. Allow us to outline the unique features that make these gems a true novelty.

What are Trapiche Gems?

Trapiche gemstones are a wonderful variation of stones exhibiting a unique star pattern from the stone’s inclusions. While the pattern may look like a star, it is not the same as star stones. Let’s dive deeper into the wonderful trapiche pattern.

When trapiche stones are created, growth patterns are defined by organic matter that forms walls of inclusions. The boundaries that form this unique pattern is a symmetrical hexagon pattern that looks like a wheel.

There are different variations of trapiche patterns. Some stones feature a central core with rays stretching out from the core of the stone, while others are more fragmented or feature thicker walls of inclusions.

In order for this natural process to occur, minerals must contain a symmetrical crystallographic habit, or system that forms crystal within a mineral. This system allows “spokes” and “arms” of the gem to formulate and be categorized as a trapiche gem.

How Are Trapiche Gemstones Formed?

Trapiche gemstones are formed in carbonaceous rock. Geothermal waters are filled with gem forming chemicals that, when combined with the host rock, promote the growth of seed crystals. During this process, the gemstone stops growing on the crystal’s rough edges and begins growing smooth faced trapiche patterns.

Within these smooth faces, the arms of the gem’s inclusions grow and separate the crystal into growth segments. The result is a rare and gorgeous pattern that looks like a wheel or star. 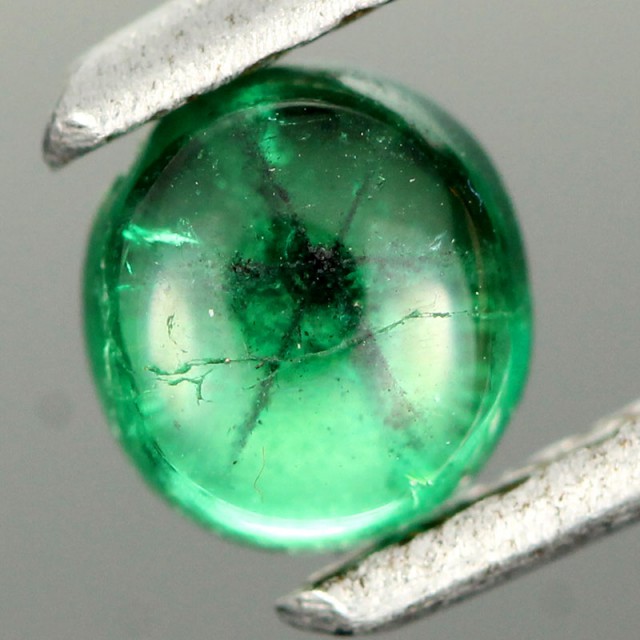 Which Gemstones Are Trapiche?

As previously stated, trapiche stones refer to the hexagonal pattern in crystal structures of certain gemstones. Considering this fact, which gemstones are classified as trapiche?

Well, there are several trapiche variations in gemstones. One of the best examples of the spoke-patterned stone are trapiche emeralds, which were first discovered in Columbia in 1879. Centuries after the initial discovery of trapiche emeralds, variations of Burmese trapiche rubies and sapphires from Australia, Africa and Asia entered the German market in 1996.

Here’s a look at the key features of the most popular trapiche stones:

The most widely available and most desired trapiche gem are trapiche emeralds. Earliest records indicate trapiche emeralds were first discovered in 1879 by a mineralogist in France named Emile Bertrand. In the early 19th century, they were used in jewelry in a gold ring given to the Victoria and Albert Museum in London. These signature green emeralds are commonly mined in Colombia, are slightly transparent and beautifully showcase the starburst trapiche pattern.

These beautiful stones first entered the German gemstone market in Berlin in 1996 when a dealer in Basel offered trapiche sapphires mined from all over the world. The rarest type are pink kashmir sapphires featuring an illuminated trapiche pattern with six sections separated by the arms of the trapiche pattern. Their unique and stunning coloring features bright hues of sapphire blue, light pink and purple. Due to their rarity, trapiche sapphires are among the most expensive trapiche stones available.

The first documentation of trapiche rubies is by the GIA (Gemological Institute of America). Initially, trapiche rubies were discovered in Burma in 1995, however, they’ve since been mined from Kashmir, Pakistan, Sierra Leone, Guinea, Tajikistan and Nepal. These stunning stones are intensely saturated in vivid hues of red and pink. Most often, trapiche sapphires are sized at under 1-carat, and are thinly sliced to showcase the best coloring and pattern. Due to these features, trapiche rubies are most commonly sold as loose stones, rather than in jewelry.

Trapiche rubies and sapphires are less common due to the processes required to get the best color and pattern for jewelry use. While these stones are in high demand, there is limited supply because of their unique features.

So, with these factors in mind, how much do trapiche gemstones cost?

How Much Are Trapiche Stones?

In the last five years, buzz generated from the rarity and uniqueness of trapiche gemstones have caused prices to double. In fact, it’s the novelty of these gorgeous stones that has inspired renowned jewelers and designers to embellish their prized designs with trapiche stones. As such, the status of trapiche stones have elevated to designer level, and so have the prices.

Even with the price increase, trapiche stones are continuously growing in popularity, making them a high demand item that jewelers have no problem selling.

It is rare to find an organic specimen that so eloquently illustrates how artful nature is, which is exactly what makes trapiche gemstones so unique. Trapiche gemstones evoke a feeling of awe and wonder and pair beautifully in rings, earrings and accessories like cufflinks.

Ready to add a flare of starburst to your life? Browse our collection of unique and rare trapiche gemstones.