TELL ME MORE
The Temple of the Emerald Buddha (also known as Wat Phra Gaeo) is a purpose-built temple that was made to house the Emerald Buddha. An image that was carved from a solid piece of green jadeite. Chaophraya Chakri, the man who eventually became King Rama I, moved the image from Vientiane, after capturing the city in 1778. It was he who commissioned the building of the temple, enshrining the Emerald Buddha as a symbol of Siam’s nationhood that had been regained. There are no monks at the temple, it is essentially the royal family’s personal chapel. Reliable chronicles suggest that lighting struck in Chiangrai, Northern Thailand in 1434. A stucco Buddha statute was discovered inside the Chedi that was struck. The temple’s abbot noted that the stucco on the nose had flaked away, showing a green colour inside. He removed the stucco and inside was the Emerald Buddha (which isn’t actually made from emerald, but actually jadeite).

At the time of this incident the province was ruled by King Samfangkaen, the King of Chiangmai. People flocked to see and worship the stunning image of Buddha. Due to its popularity, the King decided to move the image to Chiangmai. He sent an elephant out on three separate occasions to bring the Emerald Buddha to town. Each time, however, the elephant went to the city of Lampang, rather than Chiangmai. Because of this, the King believed that the spirits that were guarding the Emerald Buddha must want the statute to remain in Lampang. So, it remained in place until 1468. It was the new King, Tiloka, who finally had the Emerald Buddha successfully moved to Chiangmai. The chronicles suggest that the image was installed in a large stupa located at Wat Chedi Luang. Now, in the mid-16th century the King of Chiangmai had no sons. His daughter married the King of Laos and they had one child. A son, Prince Chaichettha. The king died in 1551, and at this time Prince Chaichettha, aged 15, was invited to become Chiangmai’s king. Unfortunately, his own father died just a year later, and it was at that time he wanted to return to Laos. He did so, returning to the capital, Luang Prabang, and with him he took the Emerald Buddha. Initially he had made a promise to ministers that he would eventually return to Chiangmai. However, he didn’t, nor did he return the Emerald Buddha. King Chaichettha was then chased out of Luang Prabang, in 1564, by King Bayinnaung’s Burmese Army. Chaichettha fled to the new capital, Vientiane, and he took the Emerald Buddha with him. It remained there for over 200 years. In 1778 King Rama I was a general. It was at that time he captured Vientiane and took the Emerald Buddha. He returned it to Thailand. Bangkok was established as the capital, signalled the start of the Chakri Dynasty, and the Rattanakosin period. The Emerald Buddha became Thailand’s sacred object and has been in Thailand ever since. It was in March of 1784 that the Emerald Buddha was moved from Thonburi to its own temple, the Temple of the Emerald Buddha. Additionally, King Rama I had two seasonal costumes created for the Emerald Buddha. One for the rainy season, and one for the summer. King Rama III, who ruled between 1824 and 1851, had a winter costume made. The changing of the costume is completed in a ceremony by the King three times a year.

While it is called the Emerald Buddha, this is down to its stunning green colour- as mentioned above the image is made of jade. The statue has never actually been analysed to determine its origin or exact composition. The Emerald Buddha is 26 inches tall, and 19 inches wide. It is in a seated positon, it’s right leg resting on the left leg. While experts are unsure when the Emerald Buddha was actually carved, it’s believed to have been carved in Northern Thailand around the fifteenth century. This is based on its style and appearance. Though, others believe it resembles the images of Buddha from Sri Lanka and Southern India. This is because the Emerald Buddha is in a meditation position, and this position was never popular in other Buddha carvings completed in Thailand. So, it may be that the carving was completed in Southern India or Sri Lanka. 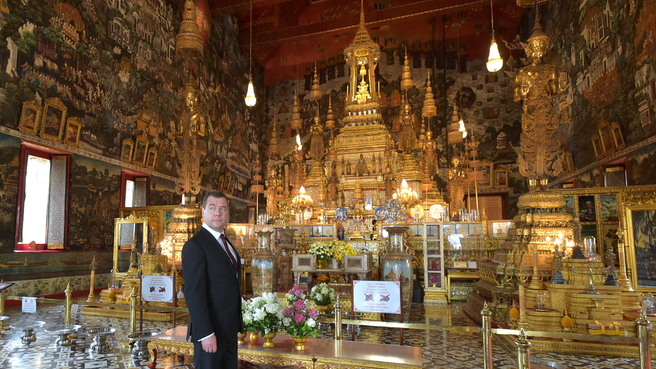 In its early Bangkok period the Emerald Buddha was taken out of the temple and paraded through the streets. This was in an attempt to relieve the area of calamities like cholera and the plague. It was during Rama IV’s reign that this practice was discontinued. He feared that such processions could result in the Emerald Buddha getting damaged. Additionally, Rama IV held the practical line of thinking that diseases were not caused by Buddha’s displeasure or evil spirits, but by germs. During the season change ceremony, the King dresses as the Emerald Buddha. He climbs the pedestal and cleans the Emerald Buddha, wiping away dust and then changes the Emerald Buddha’s gold headdress. While an attendant performs the extravagant ritual the king worships nearby. The king also sprays Lustral water, which is water that has been blessed by monks, on subjects that are waiting outside the ordination hall. Previously this was a privilege only afforded to officers and princes that were attending the ceremony within. Additionally, ceremonies at The Temple of the Emerald Buddha are also held on other occasions. Notably, Chakri Day which started in 1782. Chakri Day is a national holiday that honours the Chakri dynasty’s founding. The royal family, prime minister, and ministry of defence officials go to the temple to worship and pray.